A fantastic opportunity for players to play tournaments and win handsome cash prizes daily. KhelPlayRummy has launched the Anniversary Crazy Tournament, a daily cash tournament for all enthusiastic rummy players. With an entry fee of just Rs.20 for this tournament, players play for the grand prize of Rs.600.

At the end of the tournament the players position will be announced and the cash winnings will be remitted in the players account as per their position. 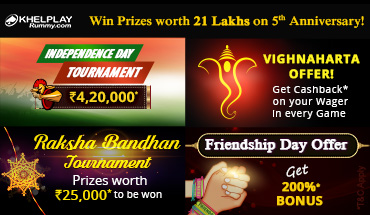