KhelPlayRummy has introduced a free rummy tournament exclusively for players who have never made a cash deposit to their KhelPlay Rummy account. In all probabilities these are the players who have played practice rummy or have tried a couple of small wager cash rummy having used the free cash they have made over some free cash promotion like Login Cash or Facebook â€“ Like, Comment, Share promotion.

Knowing that these players do love playing cash games, KhelPlay Rummy designed and introduced this free entry tournament during the Anniversary month and have named it KhelPlay Entry Tournament with a cash prize of Rs.300. Players participating in this tournament get an opportunity to experience the excitement of playing cash tournament.

KhelPlay Rummy has two KhelPlay Entry Tournament daily, these are scheduled at 1.00 pm and 6.00 pm. Players need to register for the tournament, has limited entry to 150 players per tournament. But more importantly, this tournament requires players to verify their mobile and email before their register, hence it is advisable for players to complete the verification process before they register. 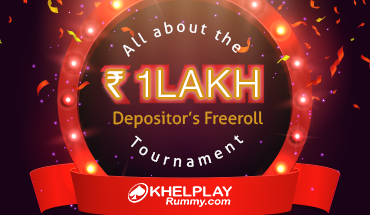