Even money gets devalued on a daily basis, but one thing that never gets devalued with time is GOLD and that is exactly what KhelPlay Rummy is giving away as prizes in a special tournament, a part of Anniversary Celebration, the Anniversary Gold Tournament.

Anniversary Gold Tournament is a specially designed tournament for Anniversary Celebration. Registration for this tournament will begin from 9th July 2015. The tournament will be played in 4 rounds. At the end of each round the player with highest number of chips will be escalated in their position and subsequently will enter the next round. There is no fixed time for each round and round will complete

The winners for the tournament will be announced at the end of the tournament according to their ranking in the tournament. The prizes will be distributed as per the ranking of the winners. The top 3 players will win Gold Coins while those following them will get KhelPlay Rummy Cash Card and Cash prizes.

While the entry to this rummy tournament is free, only players who have wagered for Rs.2500 or above between 1st and 17th July 2015 will be able to register for the tournament. The tournament is scheduled for 17th July at 9.00 pm, however since the tournament will register 500 players only, players need to full fill the wagering criteria before they register. Also KhelPlay Rummy has made it mandatory for all players desirous to participate in any tournament to verify their mobile number and email ID.

So ensure your seat by registering for this tournament at the earliest. 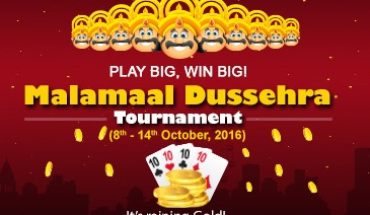