Despite being the best phone in the market, many of us don’t buy an iPhone only because of its price tag. Apple’s latest release – iPhone X – has been priced at almost Rs. 1 Lakh making it one of the costliest smartphones ever. However, the features that the iPhone X comes with also make it one of the most desirable phones ever. Here at KhelPlay Rummy, you now have the opportunity to win the fabulous iPhone X at a throwaway price of Rs. 49 only! Yes, we mean it.

Play the i-Phone X Tournament to be held on 13th Jan at 9 PM with a Buy-In of Rs. 49 and stand the chance to win the i-Phone X!

Here’s a list of 5 amazing features of the iPhone X:

The edge-to-edge OLED display is the most obvious standout feature of the iPhone X. The screen adheres to the high standards of this renowned phone maker what with a stunning color display, high brightness and a 1000000:1 contrast ratio that it boasts of.

The iPhone X comes with two 12-megapixels cameras on the rear with the lenses arranged vertically one on top of the other. In conjunction with iOS 11’s Camera app, the iPhone X supports the highly advanced Portrait mode and the beta Portrait Lighting feature that allows for light adjustments to be made.

A new feature in Messages called Animoji can mimic your mood and expressions. Animoji are animal cartoon characters that read and imitate your expressions, face movements, and speech using the front-facing camera and 3D mapping sensors of the iPhone X.

You can now unlock your phone with a single glance, thanks to the new technology – Face ID. Face ID is activated by the TrueDepth camera which is very easy to set up. It helps create a highly accurate depth map of your face by stringing together more than 30,000 invisible dots.

A11 Bionic Chip and Wireless Charging

Apple’s first internally-designed GPU is touted to be 30 percent faster than those used in its predecessor – iPhone 7. Not only that but it’s more efficient as well. Also, with no charging cable required, iPhone X can be considered as a truly futuristic piece of technology.

With so many latest features being introduced, the iPhone X is surely the smartphone which will be on everyone’s wish list! Go grab it now by playing the i-Phone X Tournament only at KhelPlay Rummy on 13th Jan at 9 PM. Join NOW as only limited seats are available for the Tournament. 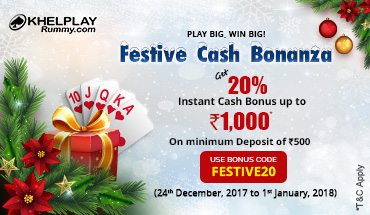