If you love card games, then you should try playing bluff. It is one of the coolest card games, and you can have a lot of fun with it. It is important to be confident while playing bluff. As it requires bluffing and revealing the truth simultaneously, these game skills can also be said as art.

The game is also known as Cheat, Doubt It, or BS. If you want to play bluff, then you should know that it also requires a set of rules. Learn all the rules of how to play bluff.

Here are all the rules you need to know to find out how to play bluff in cards.

1. Know the objective of the game

Before you begin to play any card game or even before you learn how to play a particular card game, it is crucial to know the game’s objective. Before you start learning how to play bluff card game, remember that your main objective is to get rid of all your cards. There are two ways to do so, one is bluffing, and the second is by telling the truth.

2. Learn the art of bluffing

The name of the games tells you everything about the game. It requires you to fool your opponents. If you will search or ask anyone how to play bluff game, you will get only one answer, and that is by fooling your opponents.

You will have to practice how to deceive others, put on a straight face, and follow a few tricks and you can ace at the art of bluffing.

Every game has its rules. It is important to learn these rules before you begin any card game. Given below are some of the rules that will let you learn more about how to play bluff game in cards.

Preferably, the bluff is played with four players, but more or fewer people are fine too. To start, jumble the deck of cards and distribute it among all the players.

The first player has to put down a card and say out loud, which card he is putting down. The player can lie or tell the truth. You will have to learn the art of deceiving if you want to know how to win bluff card game.

The other opponents get to choose if the player is lying or telling the truth. If an opponent objects that the player is bluffing, he gets to inspect.

This goes on till someone finishes all their cards. The player who finishes their cards first is the winner of the game.

Bluff is an interesting and exciting game. While checking out how to play bluff game with cards might seem complicated, it is a simple game that requires smartness and a little bit of card game skills.

Download KhelPlay Rummy and try your hands at the bluff. Also, let us know if this article was helpful in the comments below. 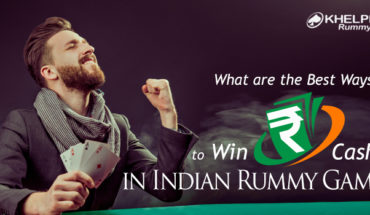